May 6, 2015, New York, NY. A student at the Cornerstone Academy for Social Action delivers a well-rehearsed Shakespeare monologue in front of his drama class. Photograph by Will Engel/NYC Photo Wire

In February, Mayor Bill de Blasio initiated a reform to the New York educational code, which requires school superintendents to get permission from the Department of Education in order to give out suspensions for “insubordination,” or defiance of authority. De Blasio claims to have done this in order to encourage schools to pursue alternatives to the punishment- based model of discipline.

“No parent should have to choose between a school that’s safe for their child and a school where every student is treated fairly,” he said in a public statement released in February.

But some New York schools have already been using alternative forms of discipline to great effect; like, for instance, the Cornerstone Academy for Student Action in the Bronx.

The Cornerstone Academy operates on a principle of “restorative justice,” a model of discipline that uses mediation and counseling as an alternative to punishment. Students who act out or break the rules are taken to a “safe room” where they will have the liberty to talk to the school social worker about why they acted the way they did. The social worker then helps them find a more constructive way to deal with the problems they’re going through.

“It’s just an organic way of doing things,” says Jamaal Bowman, the principal and founder of the school. “We treat our students as if they were our children.”

School social worker Tiffany Walton describes the safe room as a “time out” room. “I use that room whenever I have to pull them out and provide them with individual or group counseling, as needed,” she says.

“A lot of our students come from a low socioeconomic status,” says Walton. “With that, they have a realm of issues. They’re at home with parents suffering from domestic violence, homelessness, drug addiction… just basic poverty. A lot of time, those social issues can impact the learning inside the classrooms.”

Walton’s goal is to facilitate mutual respect between students and teachers. In a survey conducted by the Department of Education, the vast majority of Cornerstone teachers agreed that, “adults treat students with respect,” and that, “most students treat adults with respect.”

Sixth grader Sydney Brooks enjoys the relationship she has with the teachers. “We all get along, I guess,” she says, laughing. “I mean, as long as we behave. We still have respectable teachers, and they’re here to learn and care for us.”

Sixth grader Jaden McCartney agrees, to an extent. “Most of the teachers here can be mean some of the time, but they only do that to make us be pushed to get a better education,” he says. “Sometimes they’ll yell at us, but only when we’re not doing what we’re supposed to be doing.” That said, Michael’s record is pretty clean. He’s only been taken to the safe room once, for “not listening.” 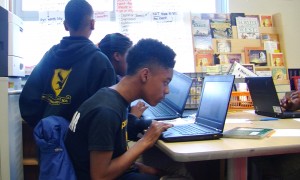 May 6, 2015, New York, NY. Each of these students were assigned to design their own school. Jaden McCartney (above) is designing his school mascot; a spartan. “We got it from the idea that spartans don’t give up,” he says. Photograph by Will Engel/NYC Photo Wire

But in Walton’s neighborhood of Eastchester, the Cornerstone Academy is the exception, not the rule. When pressed for an example of another neighboring school that used the same tactics, Walton could not think of a single one.

Anna Bean, campaign coordinator for Teachers Unite, an independent organization dedicated to education reform, confirms that restorative justice is just starting to catch on in New York. “I’d say there are over a hundred schools that are at least interested in adopting restorative justice,” she says. “But it’s definitely something that’s new to a lot of schools. Even the schools that are adopting these practices aren’t necessarily announcing them yet.”

Bean adds that the punitive model of discipline is still the norm among New York schools. “The zero tolerance movement of the 80’s and 90’s really set up schools to be largely punitive. Culturally, that’s still where our society is.”

But introducing schools to restorative justice is one thing; implementing it successfully is another. “We can have these processes in schools, but that doesn’t mean that schools are prepared to use them,” says Laura McClure, director of fundraising and communications for the Morningside Center for Teaching Social Responsibility. The Morningside Center is an organization that trains public school staff across New York to adopt restorative practices. By McClure’s account, several of the schools she’s worked with in the past few months, including Bronx Collaborative High School, have struggled with the concept of restorative justice. For them, de Blasio’s reform policy will be an adjustment.

Some critics, such as Eva Moskowitz, founder of the Success Academy charter schools, argue that restorative justice has no place in schools. The Success Academy operates on rigid behavioral codes, high academic benchmarks, and harsh penalties for any student who fails to meet either. In a scathing editorial in the Wall Street Journal, Moskowitz insists that punishment is the only language that students understand.

However, a study conducted by Rutgers University in late 2014 produces a radically different conclusion. After surveying 29 different high school classrooms, Associate Professor Anne Gregory found that in classrooms where teachers are frequently implementing restorative practices, or RP, teachers, “had more positive relationships with their diverse students,” and, “students perceived them as more respectful and they issued fewer exclusionary discipline referrals compared with low RP implementers.”

After years of working at Cornerstone, Walton couldn’t agree more. “By giving them this service, the suspension rate has gone down,” she says. “A lot of students aren’t even being sent to the safe room anymore; they just come here on their own to get that individualized or group support.”